Do you have a question?

If so, we invite you to e-mail us at gro.tchcaet@tchcaet with your homeschool-related question.  Please type “Q&A Request” in the subject line of your e-mail.

To Test, Or Not To Test?

Should I subject my homeschooled children to standardized testing? 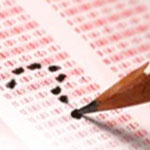 A -
Personally, I had the oldest four of my six children undergo standardized testing—one time each—at the middle school level. My reasoning was two-fold. First, I thought they might somehow benefit from the middle school experience of being in a classroom setting surrounded by other students while taking a formal test. Second, I figured the results of the tests could help me discover where I needed to improve as their teacher to better prepare them for the junior and senior high school levels.

I did not prep my children for the tests, other than to show them how to fill in and erase bubbles on a test paper, to tell them to just do their personal best, and to remind them to ask God to help them calm down if they started to get anxious during the test (Philippians 4:6,7). I emphasized to them that I would not be at all disappointed if they did not score well. I said this because I was not having them take the test to see how well (or not) they would score; rather, I was having them take the test to help me see if I might want to adjust my future teaching of each of the tested subjects. In other words, I attempted to remove any sense of pressure on them to feel they needed to score well.

As to whether my four older children really did benefit from the experience, I’m really not sure. I do know, however, that they were not harmed by it. I also think the experience helped lessen the intimidation factor of undergoing formal testing when it came time for them to take the college entrance SATs and their GED exams (neither of which was essential to their personal educational or career paths, by the way).

As to whether the standardized test results helped me to improve as their teacher, I do think they did to some (albeit limited) extent. I was able to see on paper what I already sensed were my individual children’s strengths and weaknesses, and adjusted my teaching accordingly to help build up their weaknesses and let them take more of an independent study role in their areas of strength.

Having said all that, when my fifth son entered middle school, he had an entirely different personality and skill set compared to his four older brothers. I could sense that subjecting him to the experience of formal testing in a classroom full of other students would be very stressful to him, which would likely do more harm than good. On that basis, I chose not to have him tested. Accordingly, I simply used my instinct to make continual adjustments in my teaching to try to build up areas I perceived were weaker and to let him study more independently in his stronger areas. Incidentally, as this child made it clear throughout homeschooling that he had no intention of going to college right after graduating from homeschooling (as opposed to his four older brothers who all went on to earn college degrees), I also opted out of having him take the college entrance SAT. I did, however, still have him take the GED exam. By the time my daughter came of middle school age, and with me having taken both approaches to standardized testing, I opted out of having her tested.

I want to add another thought. I have heard of the concept that public schools “teach to the tests,” which stifles creative and independent learning. Since none of my children have ever attended public school before college, I have no personal experience with that. As I am currently the middle school math teacher at a private Christian school, I know I do not teach to the tests, because I do not even know what is on the tests. Regardless of whether a child has been taught to the tests and therefore feels pressure to “perform” well, testing itself does naturally induce greater than normal stress levels in a lot of children (even adults).

“Do not be anxious about anything, but in everything, by prayer and petition, with thanksgiving, present your requests to God.  And the peace of God, which transcends all understanding, will guard your hearts and your minds in Christ Jesus.”