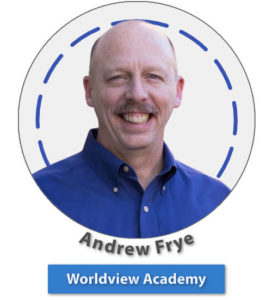 Andrew Frye and his wife, Terry, have two children and live in Grants Pass, Oregon. He is the chair of the social studies department at Grants Pass High School and an adjunct faculty member at Rogue Community College. He also serves as adjunct faculty at Pacific Bible College in Medford, OR. Andrew received a BA in History at San Diego State University and is a James Madison Fellow-Scholar with an MA in history and philosophy from Excelsior College. Andy is also a faculty member with Worldview Academy; a traveling leadership and apologetics summer camp for high school age students.

Deists or Devout? The Founders, Faith, and Freedom (Adults)
A history teacher gives a reasoned and entertaining explanation of the Founders theological and philosophical world. In an age where the mood of the moment threatens founding principles, Andy gives a solid basis for understanding how the American Constitution is generally based on solid, transcendent ideas that correlate with a biblical worldview.

Veritas: Defending Truth in a Postmodern Age (Teens)
Sometimes it seems like Christians are almost the only ones who believe in truth as a “thing.” But despite elaborate explanations, the flood of fake news, and trendy French philosophy, Andy explains why the postmodern emperor “has no clothes,” and why Christians can humbly declare truth with confidence and grace.

Logos – A Reasoned Faith (Teens)
Andy debunks the myth of blind faith and the myth of pure reason. We’ll examine how presuppositions shape all of us and why the Logos of John 1 gives us a reason to reason at all. Along the way we’ll hear about the three ways of thinking that are at war in Western culture and how they shape your worldview and your culture.

Reaping the Whirlwind: Darwin, Scopes, and Evolutionary Story in History (Teens)
The evolution-creation battle isn’t really about science – it’s much bigger than mere fossils (as anyone who has listened Dawkins and the other so-called “New Atheists” knows). They involve the way we see everything. Andy explores the truth and created myths behind Darwin’s work and the infamous Scopes trial, and explores the forgotten social and historical effects of the popularity of the Darwinian worldview.